I begin my day with this.  Apparently Hulk Hogan and his family are a bit troubled.  Last week Hogan and his wife are heard trashing the young man that their son almost killed in a racing accident.  In those tapes Hogan and Linda comfort their son.  The boy is obviously scared.  So now Linda demands that Hogan be arrested and serve time in the same facility as their son.

Hmmmm.  Seriously, what up?  I will admit that I am a big conspiracy theorist and natural skeptic about almost everything.  But this thinly veiled attempt at protecting their son is ugly. 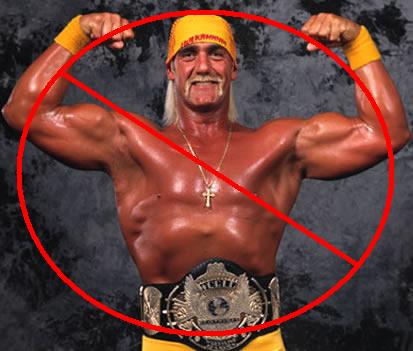 I can imagine the yard…there is Hogan doing his “Real American” thing and his son cowering behind.  Hogan you have lost my respect.  For decades now I have admired you.  I have believed and bought into your brand of patriotism.  No longer.  I see now that you are part of the American problem.  There is a large divide between the have and have not’s.  You my friend are navigating with a broken moral compass.

What happened to saying your prayers and eating your vitamins?  Is it good enough for everyone else to do their time and walk the walk as your family skates by.  Hulkster, here is one Hulkimaniac that is hanging up his gold t-shirt and moving on.